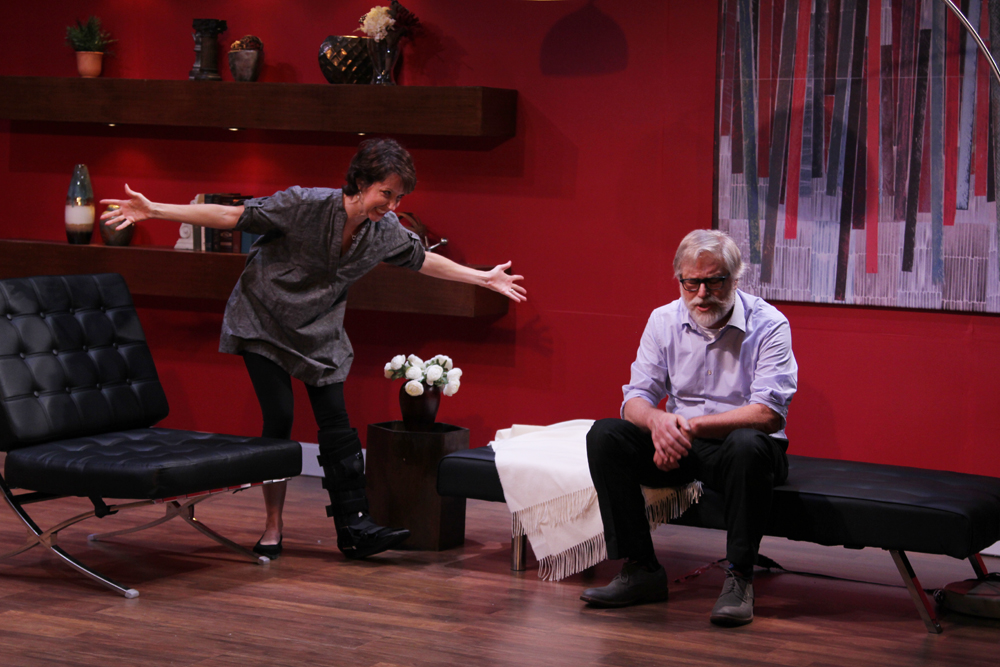 With so many theatre companies chasing the newest works, sometimes the classics don’t get the exposure they deserve on modern stages. Capital T seems to doing their part to alleviate this with their latest season, starting with one of the most acclaimed plays of the twenty-first century, Edward Albee’s Pulitzer Prize finalist, The Goat, or Who is Sylvia. An examination of the putrefying effect of family skeletons, it follows a successful family man whose life, and family, falls apart when a devastating, disgusting secret is revealed. Director Mark Pickell brings in some of Austin’s heaviest hitters to create all-star cast, who breathe new life into this classic, if under-performed, play.

In the early stages of the play, the theatre is full of, perhaps at times, uneasy, laughter, but as it reaches its final stretch, a stone-faced silence grips the audience. This is thanks to an emotional honesty that Albee brings to the material, which Pickell and company bring out with aplomb.  On a surface level, the material at the heart of The Goat is the stuff of classic farce, the idea of a man confessing a bestial affair to his wife being a pretty solid idea for a dark comedy. Albee knows this method is too easy, however, and prefers to explore the metaphor, to really dig deep into the deepest, darkest parts of the hearts of its characters, creating something much more devastating, and the play is that much better for it.

Rebecca Robinson was an actress born to play a role like Stevie. She’s an actress in touch her emotions, whose sensitivity helps to bring a verisimilitude to some scenes that would seem over-the-top if performed by another actress. When storms through her apartment, breaking expensive vases, we don’t see it as an overreaction, but as an information character choice. We feel  her anger, thanks in no small part to her emotive, expressive face. She forms a quick and early chemistry with Robert Pierson’s Martin, which makes her more impassioned moments later in the play hit with that much more weight, especially as the emotions become more muddled in the play’s late stages.

The play, of course, would not work without a solid actor in the role of Martin, the patriarch and goat-lover of the family, and Robert Pierson attacks the role with a mixture of ardor and vulnerability that helps the audience sympathize with his plight, as sordid as it is. His performance is more often than not subdued, even as the world explodes around him, and he acts a gentle, loving hand among the other characters who are splitting at the seams. His calmness can be infuriating, as we see how his actions are effecting his family, but he acts as a nice counterbalance to some of the more extreme emotions on display, especially when his son, Billy, enters the picture, played with fervent spirit by Preston Russ, as he handles the confusing feelings on display with a refreshing gentleness. It’s still difficult to truly side with Martin, but Pierson shows his love as pure and unselfish.

“The Goat, or Who is Sylvia” is one of those plays that could fall apart at so many stages, but thanks to a smart script, an emotionally honest cast, and a director who knows just how to perfectly pitch the action, the result is a poignant portrait of a family in crisis. Here’s hoping other companies take Capital T’s lead and dig up some of the more well-hidden treasure buried in years past, so that we can see what these talented casts and crews can do with real classics.