treet Corner Arts has only been around for a few years now, but they have made an amazing statement in the meantime. They’ve brought in some of Austin’s best actors and gave them challenging, unique scripts, always bringing about some of the year’s best plays. With Amy Herzog’s “The Great God Pan”, they bring Austin the Texas premier of a piece of sensitivity and weight, which brings out something special in each of its skilled actors.

“The Great God Pan” shows what happens when secrets from our pasts come in contact with our current lives. We follow young journalist Jamie, played with affective sensitivity by Devin Finn, who has a charming girlfriend, loving parents, and a new, well-paying job, which all begin to ebb and change when a figure from his past, the meek actor Frank, returns to his life, bringing a startling revelation from their childhood. We watch, almost in real time, the ramifications of these revelations, and its against this emotional backdrop that we find much of the rich tension of the play.

When watching “The Great God Pan”, there’s almost a sense of voyeurism that occurs. The performances are so naturalistic, and the action flows so gracefully, that one feels like they’re sitting in the living rooms of strangers, listening to conversations that we were never meant to hear. Part of this stems from the clear quality of Amy Herzog’s writing, which seems to be pulled straight from the street, and much of it stems from the actors themselves, who carry this text without a hint of over-acting, keeping the action grounded and earthly. It can, at times, be a double-edged sword, as this realistic feel can affect the dramatic effectiveness of certain scenes, but it also helps support a sense of emotive clarity, helping us to relate to the many characters who call this world home.

Addie Alexander perhaps performs best in the realistic style as Jamie’ mom Cath,, letting her lightness and sarcasm play well against the dourness that lives within so much of the play. Her physicality and cadence always feels so incredibly natural that it lights up the stage, especially when she’s joined by Joe Penrod, an actor who bring amazing charisma to his role as Doug. Her emotions never feel tacked on or acted, but instead seem to grow organically from the action around her, making them feel all the more realistic.

Molly Fonseca attacks every role she takes with an incredible intensity, and “Great God Pan” is no different. This isn’t to mean that she’s ever over-emotional, or overwhelming, but that, with whatever role she takes on, she live in it with such passion that you can’t help but be glued to the edge of your chair. As Paige, she plays the role often with an awkward smile, where, even at her happiest, there’s a sadness behind her eyes. Her scenes with Katie Kohler, who brings her unique sensitivity to her short time on stage as bulimic young adult Joelle, show Fonseca going through an intense series of emotions in just a few moments, showing her amazing range and control all at once.

“The Great God Pan’s” realistic nature helps its poignancy hit with more power, and its actors are able to portray this with sensitivity and skill. It’s a small play, full of personal and idealistic complications, but it’s also incredibly powerful, and another shining jewel in Street Corner Arts’ crown.

“The Great God Pan” is playing at Hyde Park Theatre through April 18th. For more information, and to purchase tickets, visit their website at streetcornerarts.org. 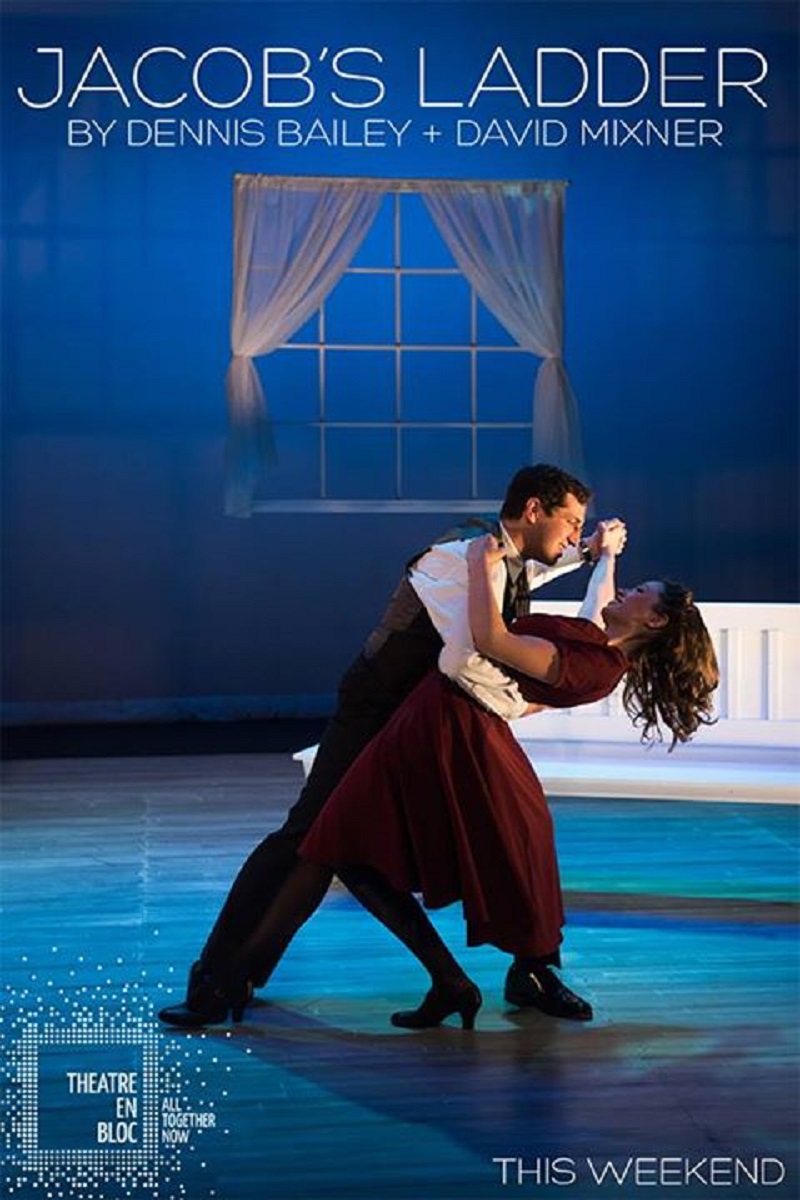 On today’s stage, the historical play is somewhat of a rare beast, especially in a town like Austin, where the modern pieces tend to reign. Writers David Mixner and Dennis Bailey look to buck this trend with “Jacob’s Ladder” a journey into the heart of World War II, where we meet a group of people touched hugely by the war in different, but nonetheless important, ways. Derek Kolluri takes this clever little script and gives it a lush, period-perfect production, thanks in part to his wonderful production team, who help to take us back the days of the 1940s, where big band and paranoia ruled in equal measure.

“Jacob’s Ladder” drops us right in the heart of the World War II White House, as we follow newly-hired Oval Office aid Jacob, as he comes to terms with being Jewish in a time where his people were being burned alive in Europe. His struggles to keep his composure and do his job while his people go through so much turmoil half a world away creating a fascinating tension, and Zach Kleinsmith plays him as a fine window character for our audience, injecting a nice sense of everyman empathy into the role that makes his plight that much more harrowing.

One of the the real stars of the show here is Johanna Whitmore as Patsy, a brassy, sarcastic she-devil, whose quips and snark make for some of the best moments of the piece. She walks on to the stage like the magical lovechild of Katherine Hepburn and Bette Davis, playing off her cast like an old hand. Since she slings the sarcasm with such ease, when her emotional moments come to call, they hit with that much more power, her tears creating a crack in our very hearts. It’s a star turn by Whitmore, which should prove a great stepping stone for the rest of her career.

Also turning in amazing work is Jay Fraley as the stern and sturdy military man Welles. Always the taciturn stoneface, it’s a delight to see Fraley’s interactions with Whitemore, as their tete-a-tetes play like the most intriguing matches of tennis. Welles is a character of principles, and there is never a moment, despite his bluster, that we doubt his authenticity. He makes an excellent foil to the glad-handing Morganthau, played with classy charisma by Tom Byrne, as his fierce determination to keep his principles balances well with Byrne’s secretive nature.

Most of the plays in Theatre En Bloc’s canon try to touch on something importat, and “Jacob’s Ladder” is no different. Taking us into a world that now seems to foreign to us, we are thrust headfirst into the life of a persecuted people fighting a fierce battle for their rights, something that will ring true as much to people in today’s culture as did in the 1940s. It’s more than just its message however, as the writers package their play with plenty of laughs as well as a pathos, giving its audience a good time while sending them home with plenty to think about, and Derek Kolluri and company are able to keep this balance well.