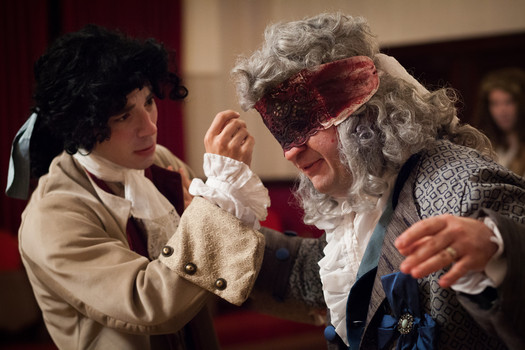 “King Lear” is one of Shakespeare’s most well-known tragedies, but during the Restoration, it had fallen out of fashion, so writer Nahum Tate took the piece and turned it into something audiences would find more palatable. Along the way, he eliminates characters, combines parts, and even gives the piece a happy ending, creating what would be considered heresy to many in today’s society. Though popular for several decades, today Tate’s “Lear” is very rarely performed, but Austin audiences are in luck, as Hidden Room has chosen this classic piece for their next production. Bringing a talented cast and fantastic designers, Hidden Room takes a piece that many have written off over the years, and gives it life and color.

Starting from the ground up, Beth Burns has compiled a talented group of professionals to bring the world of Tate’s “Lear” to life. To truly give audiences the feel of Restoration theatre, Karim Cooper, from The Globe Theatre, has been brought in to implement Restoration gesture to the proceedings, as taught by Jennifer Rose Davis here in Austin. Though at first a tad jarring, the gesture and physicality soon add to the drama, and help to truly transport audiences to a different time, and to help make physical the high drama of the priece. Also helping to transport audiences are the gorgeous costumes designed by Jenny McNee and Jennifer Rose Davis. Extravagant and grandiose, the flowing gowns and robes are impeccably designed, showing a sense of regality and aristocracy that helps gives a better understanding of the characters on stage.

The cast is also giving it their all here, as, from the smallest of parts, to the main performers, there doesn’t seem a person out of place. Of particular note is Ryan Crowder as Lear who, despite lacking the usual age to play the part, balances both the gravitas and madness of the character with aplomb. Crowder never lets the exaggerated gesture or speech become an excuse to go over-the-top, but instead keeps the character grounded, even as he’s roaring in madness. He’s joined in madness by Judd Farris as Edgar, who truly commits to his lunacy, crawling and yowling, making us believe his every emotion. His transformation from nobleman to madman is believable, even if the piece drives us to this point without much explanation.

One thing the piece does is wrench some surprising amount of humor from the piece, and much of this comes from the role of Edmund. Whether through the writing of the piece itself, or from Nathan Jerkins’ performance, the character’s devious monologues come off as darkly humorous, especially in the early stages of the piece. Though this does soften the character’s fangs at times, it creates almost a humanizing element, helping us, if not sympathize with the character, then at least enjoy our time with him.

The standout here, though, outside of Crowder’s performance, is Julia Lorenz-Olson. In a play full of giant characters, madness, and roaring storms, we find Lorenz-Olson, who brings a touching sensitivity to the role. It’s a refreshing depth of a feeling, and injection of subtle and lovely emotion, among so much darkness and sorrow. It’s all underlined by McNee and Rose Davis’s gorgeous costume design, who create stunning dresses for her to wear throughout, only highlighting the internal, and external, beauty the actress brings to the role.

While doing a production of a piece as reviled as Nahum Tate’s “The History of King Lear”, it can be too easy to play it off as a joke, but what’s remarkable is Hidden Room’s conviction to creating the best production they can. This version of “Lear” is lighter, more fun, and often more exciting than its Shakespearean counterpart, even if the ending can’t help but leave a sour taste in one’s mouth. It’s impeccably produced and researched, expertly acted, and driven with unique precision by director Beth Burns, and continues Hidden Room’s tradition of producing some of the best work in Austin.