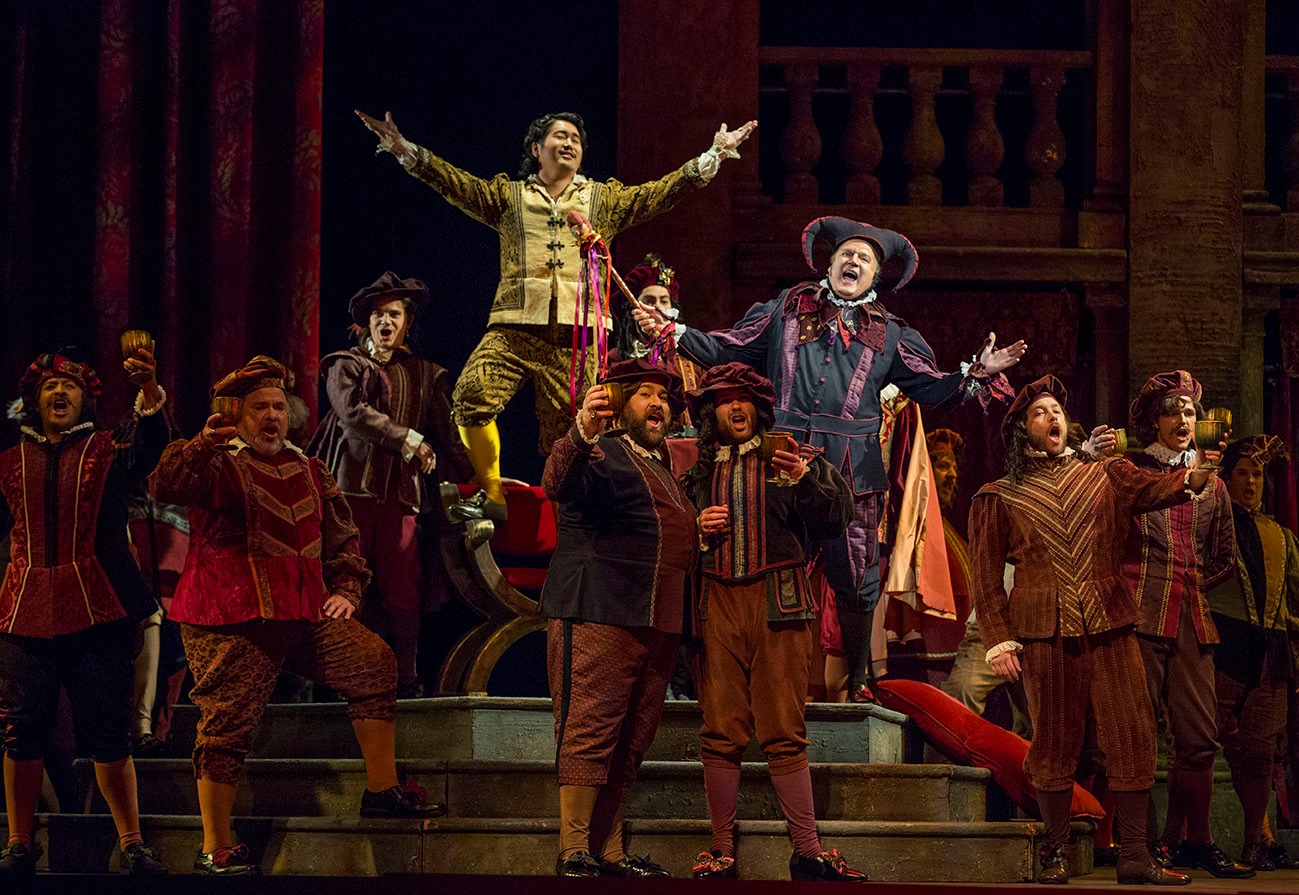 Though I consider myself well-informed in most pieces of the theatre world, I’d be lying if I said I wasn’t still a novice when it comes to opera. Though I’ve enjoyed what I’ve seen, and I know many of the composers and their work, for most productions I have the pleasure of seeing from Austin Opera, I’m coming in practically blind. I was, therefore, not prepared for the emotional napalm that is Verdi’s “Rigoletto”, the wrenching tale of a tortured clown, whose life falls apart after a father’s curse. Polished and beautifully produced, Austin Opera have crafted a gorgeously built emotional roller coaster, that’s sure to leave you with a lump in your throat as the final piercing notes play.

As the curtains open on Austin Opera’s latest production of Verdi’s classic, we’re presented with one of the most draw-droppingly beautiful tableaus I’ve had the pleasure of seeing in some time, with Chad R. Jung’s gorgeous lighting and the beautiful costuming of Susan Memmott Allred coming together in dazzling, earthy tones reminiscent of the Dutch masters. Indeed, if it wasn’t the subsequent action, one could be forgiven for thinking they were taking in a Rembrandt. This beautiful aesthetic carries through most of Austin Opera’s latest, with the impeccable sets and costumes giving the ambiance a luxe, expensive feel that helps immerse us into the court of the period, creating a tangible world, which in turn makes the emotional journey we’re about embark upon take on that much more power.

Michael Chioldi has been a mainstay on the Long Center boards in numerous productions, but I believe this may be the role for which he’s remembered. The titular role of Rigoletto is not an easy one to pull off, as in many ways the horrific events that unfold upon him are of his own doing, and even in his darkest moments there’s a thought that, had he gone forward with a little more foresight, or a little more concern, all of the bloodshed might have been avoided. There’s also a sense of foolishness to the character which would hurt the sympathy in the hands of a lesser actor, but luckily Chioldi is able to carry these many elements on his talented shoulders, giving us a glimmering, multifaceted performance that tugs on our heartstrings despite his character’s questionable actions.

Rigoletto may skirt the line between sympathetic and villainous, but the Duke dances all over it. The character is, of course, the antagonist of the piece, but there’s an earnestness to his actions that one can’t help but appreciate. It certainly complicates things that Kang Wang is such a charismatic presence, and one can see why so many women would be pining after him. For his part, Wang is able to carry a difficult dychotomy with gusto, creating some of the best moments of the production with his cunning and charm.

One mustn’t forget the real rising star of the piece, Madison Leonard, whose effervescent, adorable performance as Gilda practically busts off the stage with youthful exuberance. Her moments of gaiety are lovely moments of respite from the emotional devastation that makes us so much of Rigoletto’s running time, and nearly every time she’s on stage you can’t help but crack smile (at least, until that last act comes along). She shows such a devotion to her role, and has the gorgeous, clear voice to match, that one can only imagine a long, storied career from her in the years to come. One hopes she finds her way back to the Austin stage sooner rather the later.

Opera is, other than perhaps dance, the most concentrated presentation of human emotion the arts has to offer, and “Rigoletto” is a testament to this fact. It’s nearly thee hours of emotional warfare, with Verdi’s gorgeous music underscoring one of the most heartbreaking stories in canon, and Austin Opera’s talented team has provided a polished, poignant presentation of this crushing classic. Though it may be a tough sit for those not used to the tempo of Verdi’s work, fans of the medium will find joys aplenty in Austin Opera’s latest work.