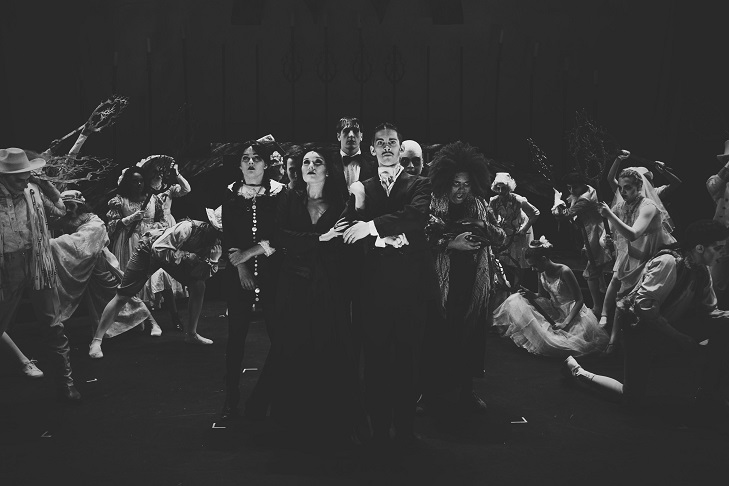 ‘Addams Family’ is a polished, if corny, musical comedy

Over its decade-spanning existence, Summer Stock Austin has become a city institution, creating some of the most memorial music moments in Austin theatre history, and it has given birth to many skilled performers in Austin, and throughout the country. It’s a fantastic showcase for young performers, giving them a chance to perform for large audiences without paying a dime, and in the process enriching the Austin theatre experience. With the departure of their previous director, Michael McKelvey, there was some concern that the quality of their productions might dip, but with their latest production, the campy, creepy, corny The Addams Family: The Musical, one can see the organization is still in good hands.

The Addams Family follows the Addams as they prepare to meet Wednesday’s new boyfriend, whom the young woman met while hunting birds in Central Park. Of course, this revelation sits poorly with her family, particular her mother, and this feeling is only exacerbated when the boy’s family sends a ghastly gift: flowers! Secrets are kept, lies are told, loves are gained and lost, and Gomez is put in the precarious situation of being stuck between letting down his daughter and lying to his wife, which are, as one musical number states “Two Things He Could Never Do”. This explodes in a riotous night of music and mayhem that only the Addams could provide, as old school meets ghoul school in a beautifully chaotic way.

Coming into Addams Family is like being reintroduced to old friends, but know that these characters share more in common with their original comic strip counterparts than their film versions.  Fester and Grandma are goofier than in the TV and film versions, and everything, on the whole, is raised to a higher camp level. Unfortunately, Gomez also loses much of his suaveness, here replaced by a level of cheesy comedy that while refreshing, takes him all the further from the dashing figure Raul Julia presents in the films. This all makes things much funnier, on the whole, but can be disorienting for those who are only familiar with the Addams Family films.

The true showstopper here is Mariel Ardila as Morticia. Though she turned heads last year in Summer Stock’s Footloose, her turn as the sultry yet sassy matriarch of the Addams clan is nothing short of star-making. Not only does she cut a fine figure in the gorgeous, if incredibly revealing, costumes by Rachel Koske, she proves more than a pretty face with a stern and polished affect that you can’t help but admire. Her voice is one of the best in the cast, and there are few other performers that slip so easily into Ginger Morris’s complex choreography. Despite being many years his senior, she forms a fast chemistry with Benjamin Roberts’ Gomez, and the couple’s playful banter is one of the play’s highlights. There’s a bright future ahead for this college Junior, and one can only hope she finds her way back to Austin stages in the near future.

One of the major issues with Addams Family the Musical is just how corny it is, and it takes a true comedic talent to cut through such heavy layers of cheese. Benjamin Roberts is one such performer. While still in high school, the actor proves to have better timing than many working comedians, and brightens every scene he’s in. He still falls prey to just how lame the jokes become in some stages, but he tries to sell the material as best he can, and never loses his thick Spanish accent.

Summer Stock Austin has once again kicked off its season with a rollicking crowd-favorite, a corny, yet humorous, comedy that serves as a talent show for a handful of skilled performers. It may not have the flash or polish of some of Summer Stock’s best, like Sweeney Todd, Legally Blonde, or Little Shop of Horrors, but Addams Family: The Musical is still a fun, sweet, and energetic take on these classic characters, given a fine production by these talented young actors.

The Addams Family: The Musical is playing at the Long Center’s Rollins Stage through August 13th. For more information, and to purchase tickets, please visit Summer Stock Austin’s site at summerstockaustin.org.

Ryan E. Johnson is a theatre and film critic, who has written for Examiner.com, Austin.com, and Austin Lifestyle Magazine. View all posts by Ryan E. Johnson