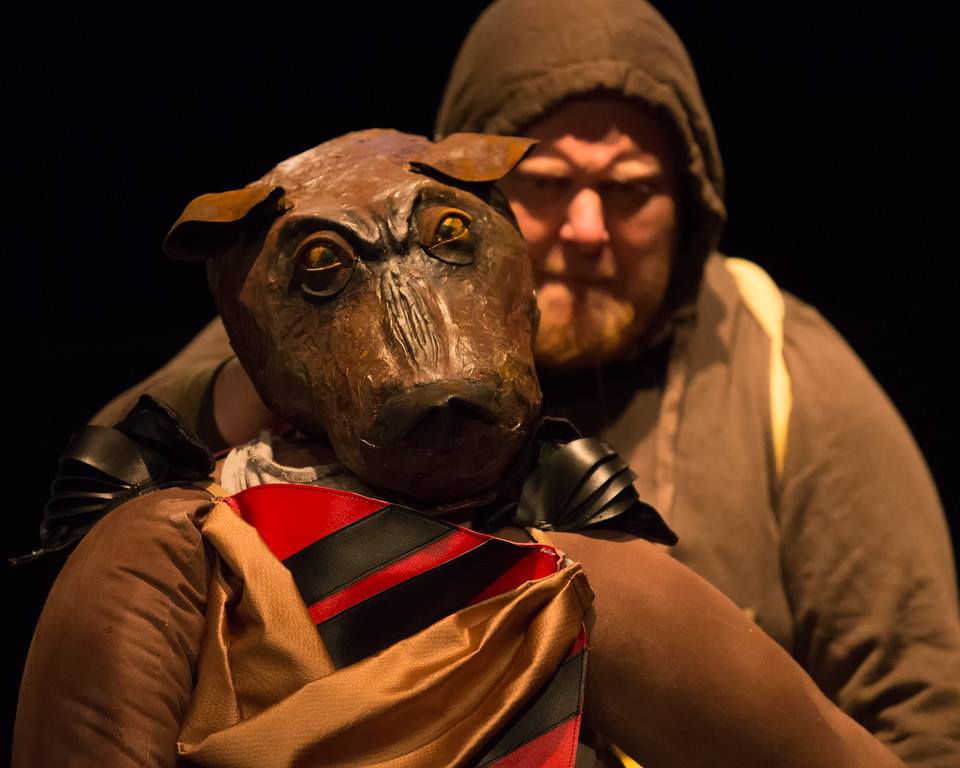 When Trouble Puppet’s “Wars of Heaven: Part I” hit last year, audiences were not sure what to expect. So many of Trouble Puppet’s previous shows had their basis in literature or history, and even if they veered off in different directions, there’s always a stabilizing backbone behind it all. With “Wars of Heaven”, they let their imaginations run wild, and the result was a unique piece of artistic beauty. Their follow up “Wars of Heaven: Smackdown”, feels less like a sequel and more of a concurrent storyline, taking us to another corner of this twisted universe, as two high-ranking hosts of heaven and Hell match wits in theological debate, with the lives of innocents one the line.

“Wars of Heaven: Smackdown” brings audiences to a world that’s at once familiar, and yet wholly original. Taking its inspiration from Professional Wrestling (if the title “Smackdown” wasn’t clue enough), everything from commentators to huge personas speaks a language that will be familiar to anyone versed in the wrestling world. However, these battles are not fought on the canvas. Instead, the two challengers (one a high-rankng angel, the other a high-ranking demon) engage in a battle of wits, given horrifying personification in the form of innocent souls, forced to fight according to which side is winning the argument (and the arguments tend to be very one-sided, leading to a bit of a bloodbath). The sadly short piece builds to a shocking, soul-crushing twist ending that will stay with its viewer for some time.

The first thing you notice as you walk into “Wars of Heaven: Smackdown” is the scale. Most of Trouble Puppet’s previous plays happened on miniature sets, but here, we’re treated to one of the largest pieces of scenery in the company’s history, a large arena, complete with background puppets and a flat-screen TV. The main puppets follow suit, as they tower over the other puppets and characters, proving to be two of the most impressive pieces of work I’ve seen from the company. It all comes together to make the piece feel more epic, even as the shortened running time and the more straightforward plot make for a less intriguing experience than its predecessor.

After several years, Trouble Puppet Theatre, one of the boldest and most original companies in Austin, is losing its home, making their latest production, “Wars of Heaven: Smackdown” their final production for some time. It’s very telling that they chose this play to be their last in the space, as its no a somber, melancholy affair, but instead bursting with life, opening with opera, and taking its structure from Professional Wrestling. If it fails to meet some of the highs of some of the company’s previous efforts, it’s only because they left such a high benchmark. If Trouble Puppet has to leave the building, they’re going out with a bang, and taking he building down with them.