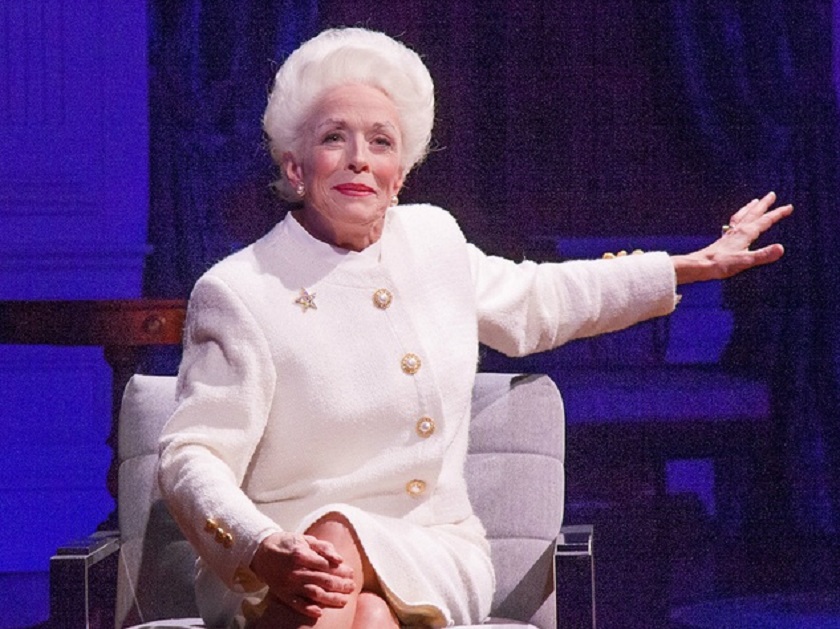 It takes a special kind of talent to create a one-person show, to strip everything down to the barest of bones, until it’s just you, and the audience. Holland Taylor takes this challenge one step further with her one-woman show, “Ann”, as she presents the life of one of Texas’s most famous politicians, Ann Richards, the spitfire Democrat who somehow rose through the ranks to become Texas’s head honcho. Taylor pulls double duty here, both writing and performing this humorous piece of historical hilarity, taking us from Richards’ earliest days on the farm to her final days in New York, all while bringing charm, wit, and wisdom.

“Ann” follows the life of Ann Richards, focusing mostly on a single day in the middle of her tenure as Texas Governor, when she’s left with the decision of whether or not to offer a stay of execution for a young man. This story is told through an interesting framing device, where Richards is giving the Graduation Address to a group of a graduates from a nameless college. Through this, we see not only her years in office, but also her days as a child, recalling days of her kind father, and harsh mother, through her relationship with her whip-smart husband, her time running campaigns, and, finally to her own campaign. Some elements are not dealt with as deeply as one would wish, but Taylor does a fine job showing us the breadth of the icon’s life.

As “All the Way” did last year with the Texas in the sixties, one thing that “Ann” does beautifully is tell us not only the story of Ann Richards, but in its way, the story of Texas in the nineties. Throughout her conversations with various figures, we get an image of the shape the state was taking under her tutelage, and how indelible a presence she was during her time in office. The omission of anything involving the Bushes is a bit disappointing, as anyone who knows Richards’ history know she always had some fiery words to throw in the direction of one Bush or another, but we still get great interactions between Richards and many figures of the day, including several hilarious scenes involving phone calls with president Bill Clinton.

From the moment the play begins, we never truly see Holland Taylor, as she’s absolutely transformed into Ann Richards. Everything, from her dialect, to her gait, to her mannerisms, feel true to the character, and nothing ever feels forced. It’s obvious that Taylor has done her research, as it feels like the woman herself is visiting us throughout the play. One thing that Taylor captures best is Richards’ humor, with her many witticisms bringing about waves of riotous laughter. She’s candid, she’s tough, and she’s smart, and as we leave theatre, we can’t help but think that, in a way, it feels like we’ve just spent two hours with the former governor herself.

Though segments don’t reach quite as deeply as we could hope, it’s hard to find fault with the way Holland Taylor presents the life of Ann Richards. There is not a moment in the piece that feels inauthentic, and Taylor’s performance is nothing short of miraculous. She captures the humor, the bite, and the heart of the woman who so shaped Texas politics, and one would think the woman herself would be honored to see such a polished tribute.

“Ann” is playing at Zach’s Topfer Theatre through May 15. For more information, or to purchase tickets, visit Zach’s website at zachtheatre.org.