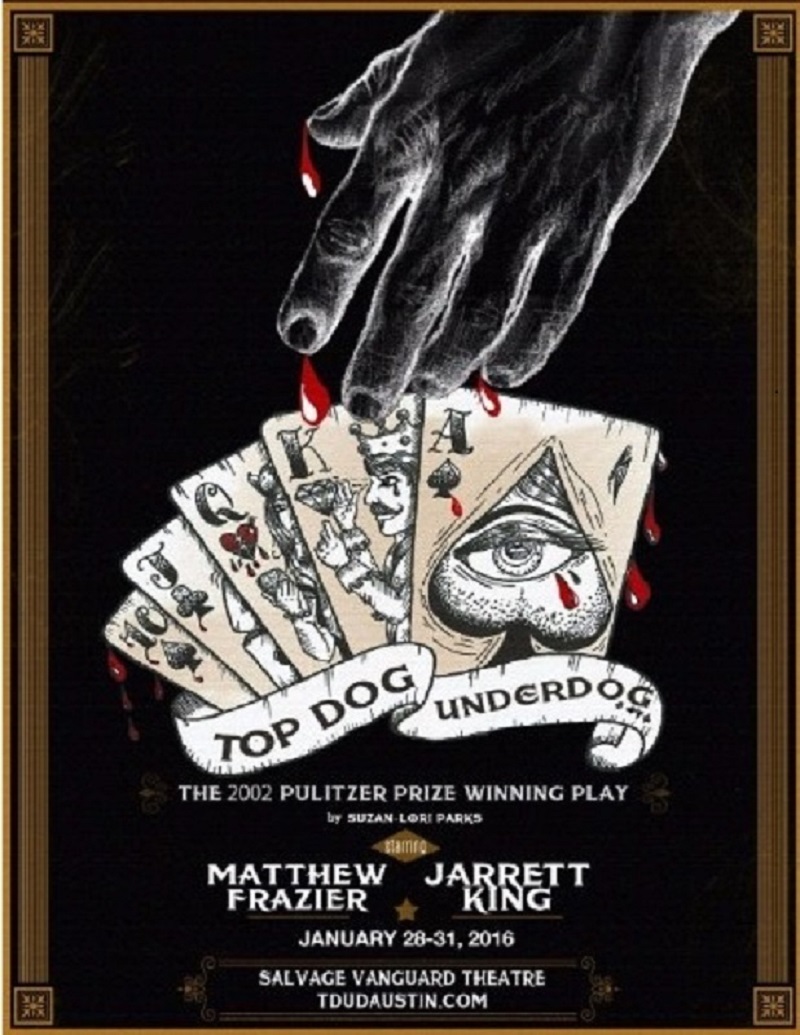 Suzan Lori-Parks’ Pulitzer-Prize winner “Topdog/Underdog” is one of the most celebrated plays of the 21st century, and a powerful comment on being African American in America, making it a rather daunting mount for even a veteran theatre troupe. That “Viceroys”, a fledgling company without a single production under their belts, would take it on shows courage. Luckily, they bring in two amazing performers, one, one of Austin’s best unsung talents, and one, a fresh young star from New York, and bring in the steady hand of Jason Phelps to create something powerful, yet fun.

“Topdog/Underdog” tells the tale of two African-American brothers, Lincoln and Booth, trying to make their way in a rough side of the city. Abandoned by their parents, the two live off what little inheritance their parents left, as well as the small pittance Lincoln makes as a Lincoln impersonator at a nearby arcade. Booth wants to become a master of Three-card Monte, as his brother once was, but, since his brother has given up the game, he lacks the skills to make it. The duo’s attempts to make their way honestly down a road which leads only to hustle and violence is the stuff of pure drama, and something that the directors weave into a highly important piece of theatre.

Jarret King is a performer who wears his heart on his sleeve. Even at his toughest, he’s a performer who brings light and innocence to his performances, an actor who experiences his feelings with great intensity. What this creates in a character is a sense of emotional intelligence, a sense that the emotions on display feel authentic. In “Top Dog/Underdog”, Jarret’s character Lincoln is pulled in many different directions emotionally, and it’s this emotional intelligence that makes each of these hit hard. Lincoln puts up a tough front, but it only takes the slightest hint of provocation for him to show his hand, showing his emotions boldly, whether it be his sadness, his joy, or his fear. In previous productions, we have learned that King has a real talent for comedy, so it’s fantastic here to see that he also carries his talent for emotional truth into drama as well.

While Jarret King is an actor who puts his emotions on display, his co-star, Matthew Frazier, prefers to keep things tight to the chest. Throughout the play, he stays cool, suave, gliding around the stage and boasting about everything he has. There’s something dangerous behind Booth, and we see this early on, as the literal Chekov’s gun of the play is pulled out as we barely into act one. It’s to the actors credit that Booth comes off so likable, however, as there’s something in the smoothness of Frazier’s delivery throughout that makes him endlessly charming, even as he’s pulling out hundreds in stolen goods, or committing far worse crimes. One hopes the actors stays around town, because the scene could only benefit from such a charismatic presence on stage.

Viceroys may be a jagged, newborn company, rough around the edges, but they show amazing potential in their early stages. Suzan Lori-Park’s deceptively important text is kept in capable hands, as the two leads provide charismatic, yet emotionally stirring, performances, keeping the feeling jovial and light, until the play’s final, searing moments. This production has a tragically short run, so make sure to head to the theatre to see it TODAY.

“Top Dog/Underdog” is playing at Salvage Vanguard Theatre through January 31st, so be sure to grab your tickets now at tdudaustin.com.